The Lowcountry Digital History Initiative (http://ldhi.library.cofc.edu/) is an online exhibitions platform hosted by the Lowcountry Digital Library (LCDL) in partnership with the Avery Research Center for African American History and Culture, the Program in the Carolina Lowcountry and Atlantic World (CLAW), College of Charleston-Citadel Graduate College Master of Arts in History Program, and the College of Charleston Race and Social Justice Initiative. We are pleased to offer the following announcements and updates:

New Online Exhibitions:
As of May 2016, LDHI features nineteen online exhibitions that highlight underrepresented histories in the Lowcountry region and interconnected Atlantic World, with many more in progress. Our latest exhibitions include:

A Tribute to the Mother Emanuel Church
http://ldhi.library.cofc.edu/exhibits/show/mother-emanuel-tribute

Project Partners: Co-curated by Lowcountry Africana, the Lowcountry Digital History Initiative, and the College of Charleston’s Avery Research Center in partnership with the Mother Emanuel Church.

This online tribute documents local, statewide, and national responses to the tragic mass shooting that took place at the Emanuel AME Church, also known as Mother Emanuel, in Charleston, South Carolina, on June 17, 2015. Through photographs from a range of sources, this visual account reveals an overwhelming outpouring of emotion and grief for the victims, survivors, and their families, as well as powerful efforts in the weeks and months following the shooting to address racial injustice and violence. Published May 2016.

Avery: The Spirit That Would Not Die, 1865-2015
http://ldhi.library.cofc.edu/exhibits/show/avery

2015 marked the 150th anniversary of the founding of the Avery Normal Institute and the 30th anniversary of the establishment of the Avery Research Center at the College of Charleston. This online exhibition explores over one hundred and fifty years of Avery history—from its origins as a school for Black Charlestonians starting in 1865, to its current form as a center for promoting the history and culture of the African diaspora with an emphasis on Charleston and the South Carolina Lowcountry. Published May 2016.

This exhibition traces the history of the cotton factory in Charleston, South Carolina, from 1880 to 1900, and examines how mill workers—black and white, male and female—struggled for better working conditions in the contentious political, social, and economic contexts of the late nineteenth century. Published December 2015.

Liverpool’s Abercromby Square and the Confederacy During the U.S. Civil War
http://ldhi.library.cofc.edu/exhibits/show/liverpools-abercromby-square

This exhibition explores connections between the U.S. South and Great Britain during the American Civil War, particularly through trading activities led by a group of influential businessmen who lived in Liverpool’s Abercromby Square. Despite widespread popular opinion against slavery by the mid-eighteenth century in Great Britain, the fortunes of this elite neighborhood were still intricately tied to the fate of the Confederacy. Published December 2015.

New Partnerships – Race and Social Justice Initiative: go.cofc.edu/rsji
In late June 2015, the Avery Research Center, Addlestone Library, African American Studies, and the Lowcountry Digital History Initiative (LDHI) at the College of Charleston received a major grant from Google to launch the Race and Social Justice Initiative (RSJI)  in response to recent tragic events in the Charleston area, including the shooting death of Walter Scott by a police officer in April 2015 and the mass shooting at the Emanuel AME Church in June 2015. With this support, RSJI is working with numerous partners to facilitate public events, exhibitions, and various projects that promote awareness of the history and ongoing struggles of racial injustice in Charleston, South Carolina, and throughout the United States.

Thank you to our 2015-2016 Graduate Students!
Special thanks to our graduate assistants from the College of Charleston-Citadel Graduate College Joint Master of Arts in History Program: Monica Bowman, Ciera Gordon, Jamie Mansbridge, and Leah Worthington. They’ve done wonderful work with LDHI, and best of luck to our graduates!

Help us share:
LDHI hopes to be a growing resource in the Charleston area and beyond. Please feel free to share LDHI in the classroom, on websites and social media, or through public talks or programming. Follow the Lowcountry Digital Library (LCDL) on Twitter and Facebook for more LDHI and LCDL updates!

We’d love to hear from you:
We are interested in your feedback! Please contact Project Coordinator Amanda Noll (nolla@cofc.edu) or Co-Director Mary Battle (battlemp@cofc.edu) with any comments, suggestions, or questions you have about current and future LDHI projects, including new project partnerships.

You are invited to the Carifest Symposium, held on June 14th from 6-9 pm at the Avery Research Center on 125 Bull Street. Reception starts at 5:30 pm. 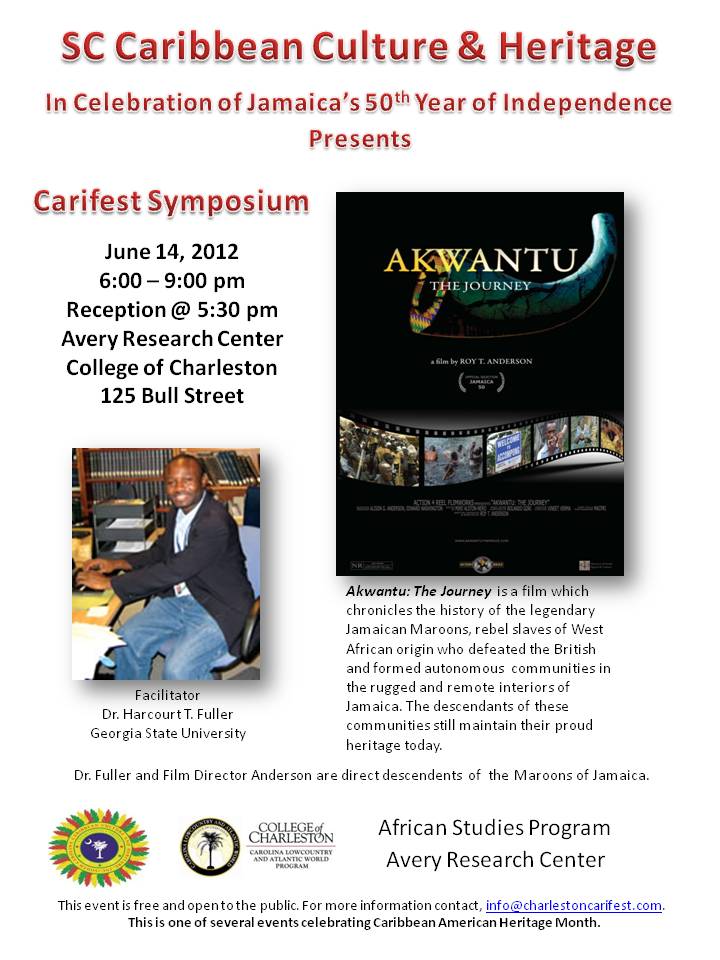