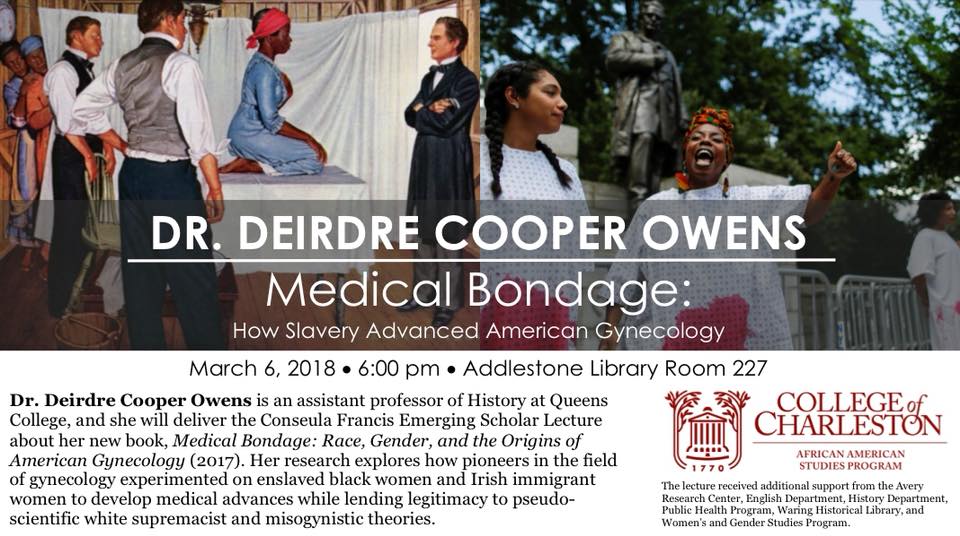 Dr. Deidre Cooper Owens will deliver a lecture for the African American Studies Program’s Conseula Francis Emerging Scholar Lecture Series at 6:00 pm on Tuesday, March 6th on the subject of her new book, Medical Bondage: Race, Gender, and the Origins of American Gynecology. Many of the medical instruments and even the medical procedures of gynecology today can be traced to antebellum-era experiments on enslaved black women, experiments that would regularly disregard the pain and the dignity of these women, experiments that wholly disregarded the very idea that these women could control their own bodies. But we find the legacies of exploiting black women’s bodies elsewhere too—in African American distrust of the medical system, racial disparities in health outcomes like infant mortality, racist and sexist ideas about black women, to name a few. (This distrust only increased with the coerced sterilization of poor black women, which remained legal until 1984 in South Carolina.) Dr. Cooper Owens also recovers the voices of the enslaved women subjected to these experiments, itself an act of memorializing their suffering and their lives. Her lecture promises to generate difficult (if not disturbing) yet necessary conversations about race, gender, and medicine.

The lecture will be held in the College of Charleston’s Addlestone Library (room 227) and is free and open to the public.