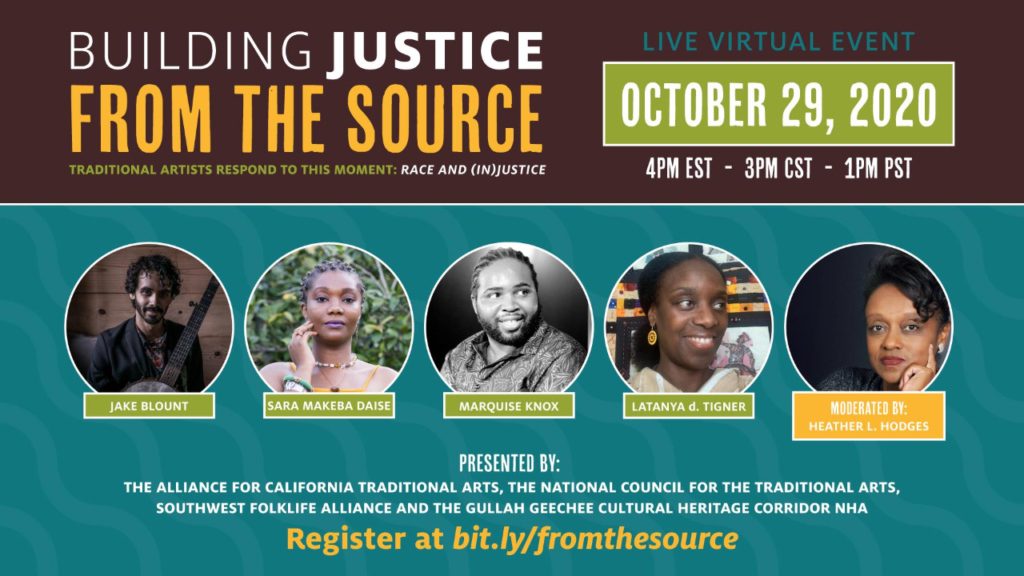 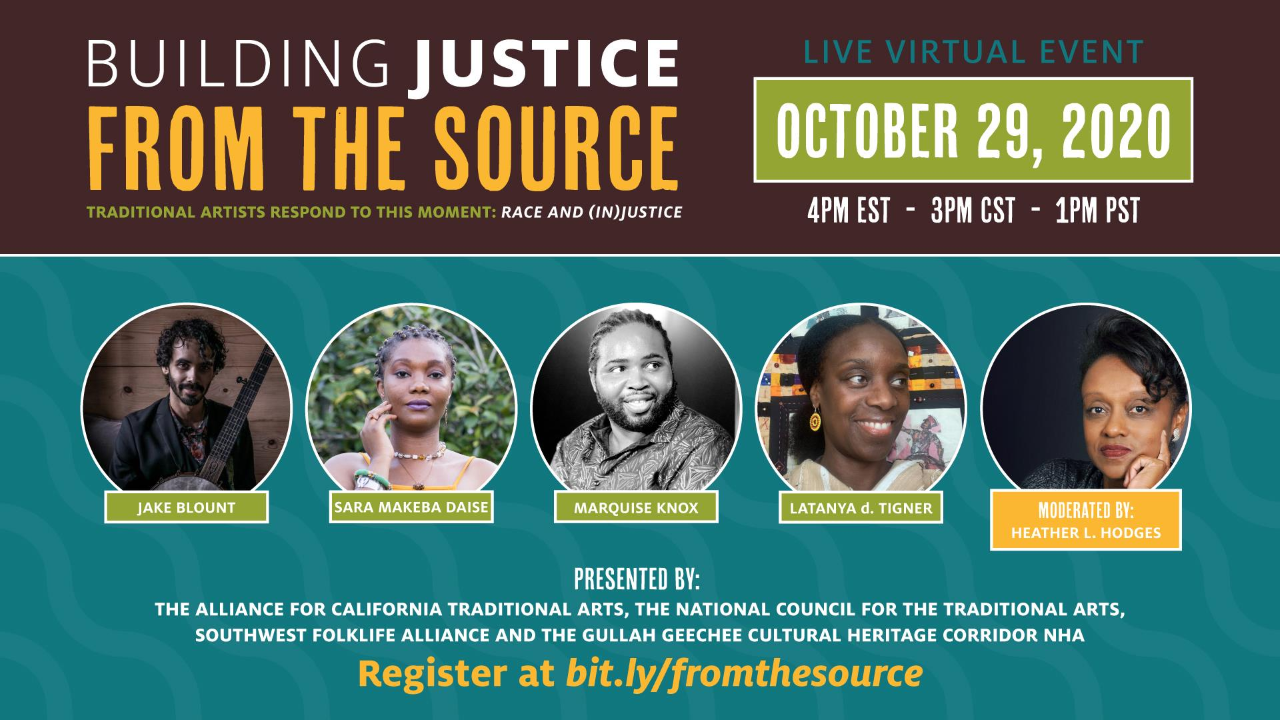 Building Justice From the Source

The Gullah Geechee Cultural Heritage Corridor NHA invites you to attend a live, virtual event on Thursday, October 29, at 4PM EST. This virtual event will bring together a group of emerging, traditional artists from across the nation: Jake Blount, Sara Makeba Daise, Marquise Knox and Latanya D. Tigner. They are all deeply rooted in traditional culture and drawing on that powerful wellspring to offer important, contemporary social critiques of race, racial injustice and notions of self-identity. Their work encourages us to shape new narratives around contemporary, cultural identities rooted in traditional ways of knowing, living and making art — yet keenly responsive to our current moment.

To register for this virtual event please visit: bit.ly/fromthesource 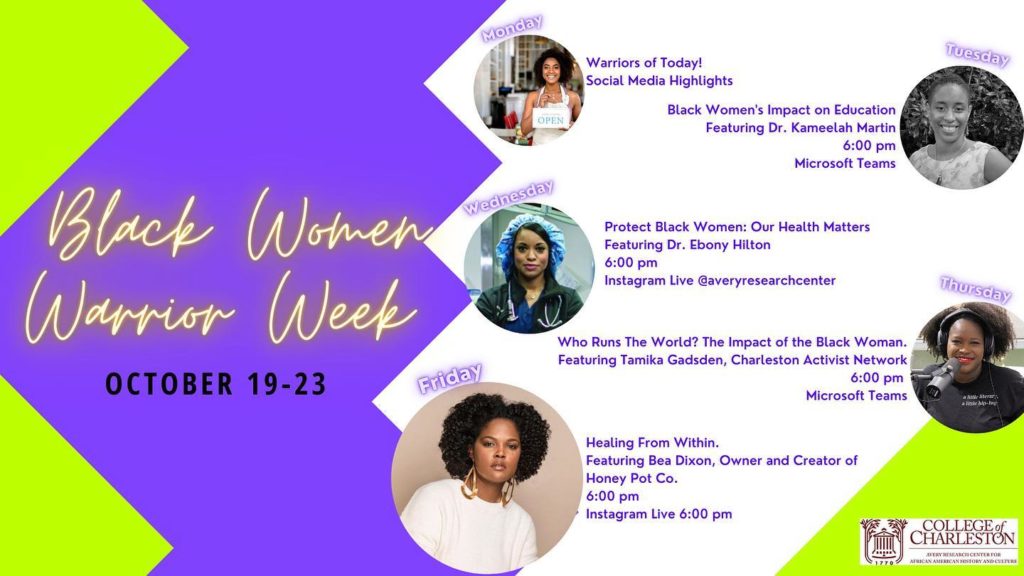 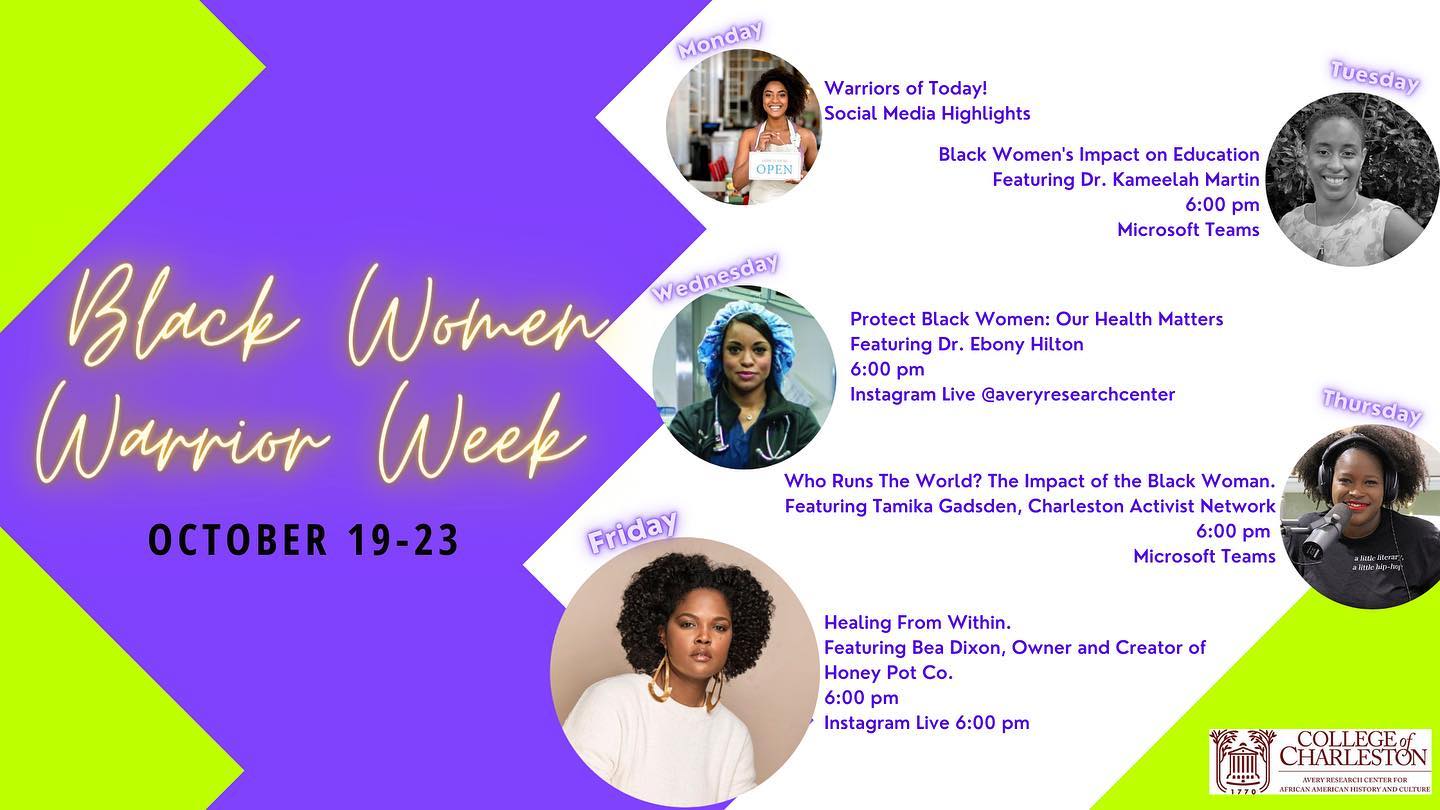 The Avery Digital classroom is back with their weeklong event series: Black Women Warrior Week!

All event links are posted in their Instagram Bio: @AveryResearchCenter.

The Hines Prize is awarded to the best first book manuscript relating to any aspect of the Carolina Lowcountry and/or the Atlantic World. The prize carries a cash award of $1,000 and preferential consideration by the University of South Carolina Press for the CLAW Program’s book series. If you have a manuscript on a topic pertaining to the Carolina Lowcountry and/or Atlantic World, please send a copy to CLAW Director Sandra Slater slaters@cofc.edu before May 15, 2021. If you have graduate students with potential manuscripts that could contend for the Prize, please make sure that they know of this biennial opportunity. 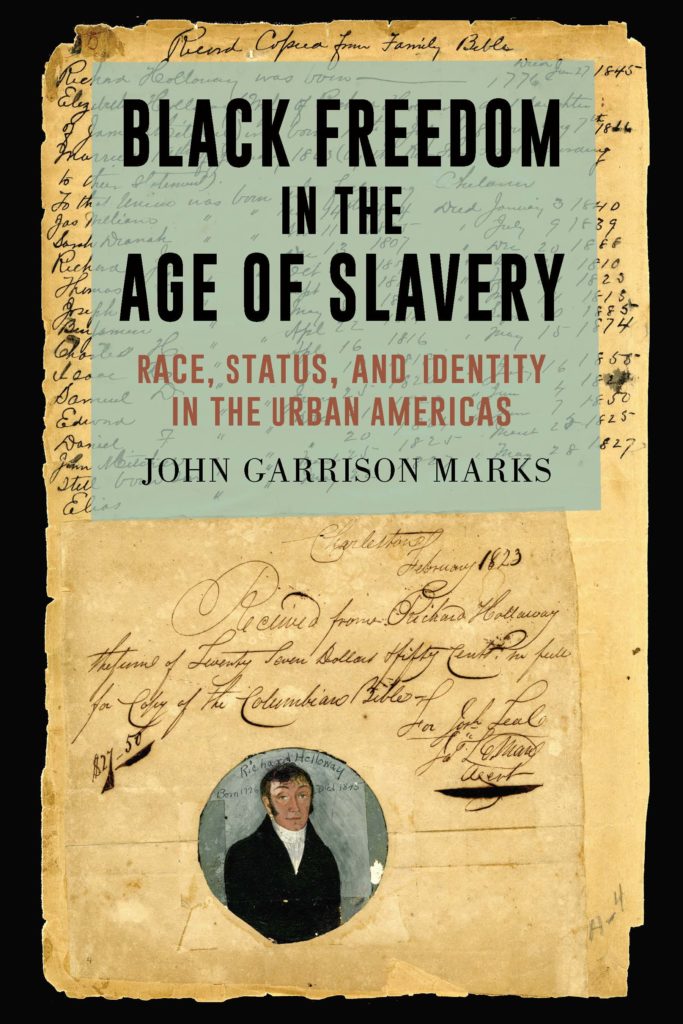 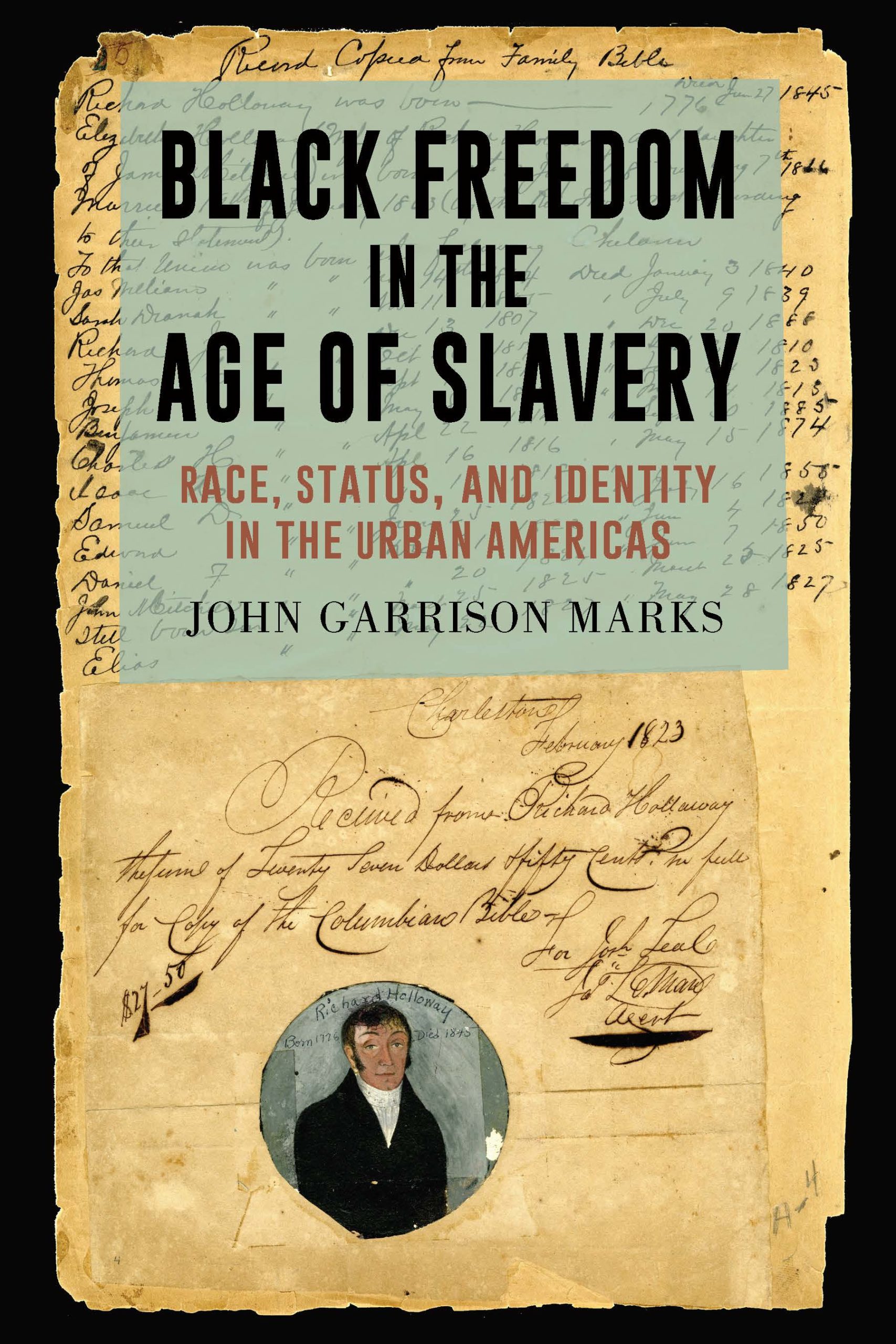 Black Freedom in the Age of Slavery

Race, Status, and Identity in the Urban Americas

Prior to the abolition of slavery, thousands of African-descended people in the Americas lived in freedom. Their efforts to navigate daily life and negotiate the boundaries of racial difference challenged the foundations of white authority. Black Freedom in the Age of Slavery examines how these individuals built lives in freedom for themselves and their families in two of the Atlantic World’s most important urban centers: Cartagena, along the Caribbean coast of modern-day Colombia, and Charleston, in the lowcountry of North America’s Atlantic coast.

Built upon research conducted on three continents, this book takes a comparative approach to understanding the contours of black freedom in the Americas. It examines how various paths to freedom, responses to the Haitian Revolution, opportunities to engage in skilled labor, involvement with social institutions, and the role of the church all helped shape the lived experience of free people of color in the Atlantic World. 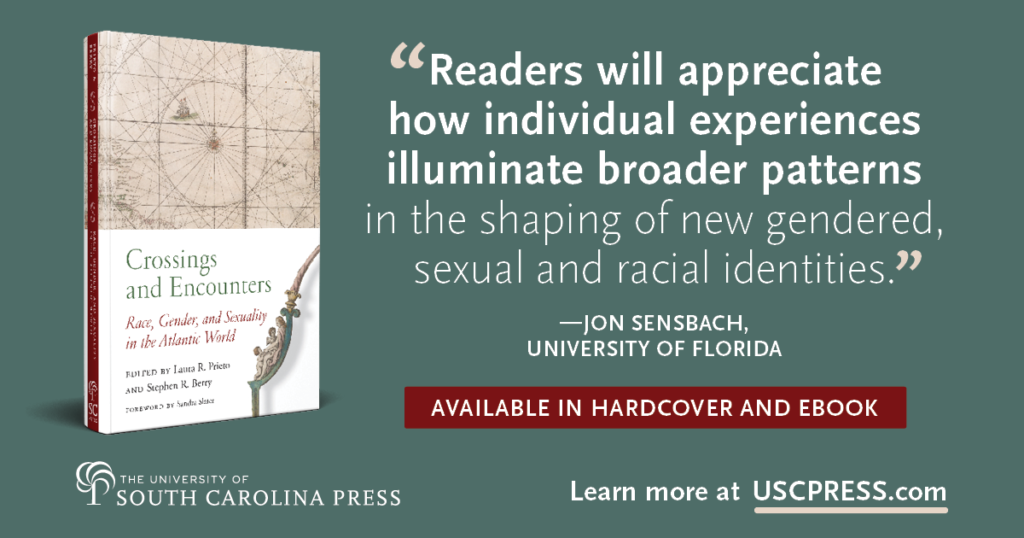 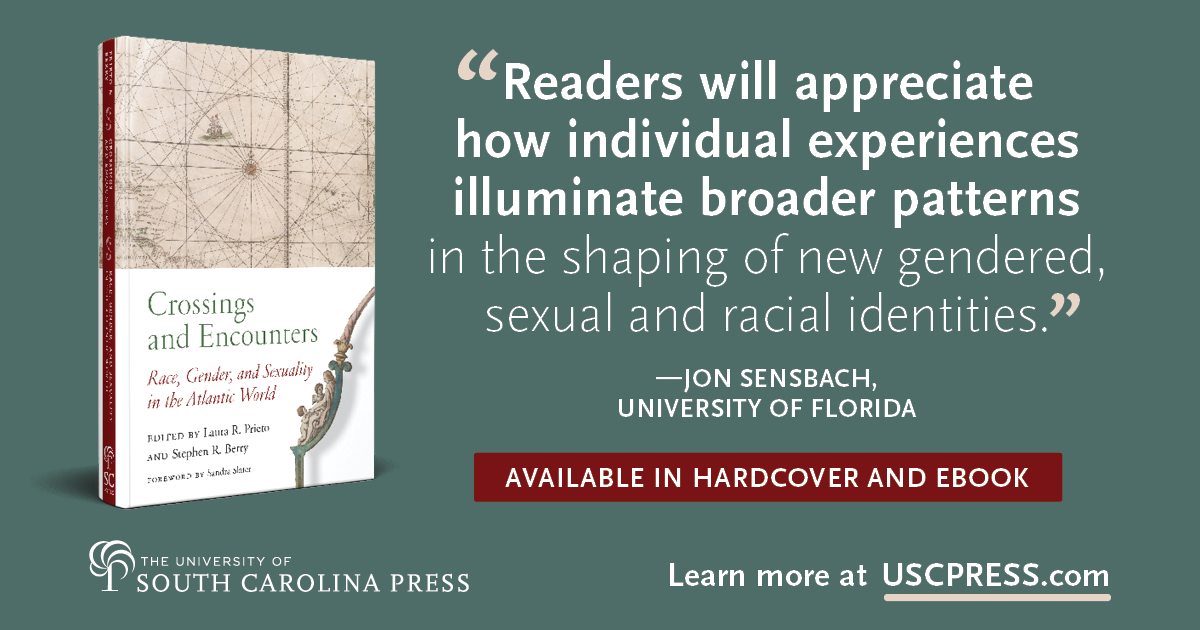 Now on sale! CROSSINGS AND ENCOUNTERS: RACE, GENDER, AND SEXUALITY IN THE ATLANTIC WORLD, edited by Laura R. Prieto & Stephen R. Berry, with a foreword by Sandra Slater. 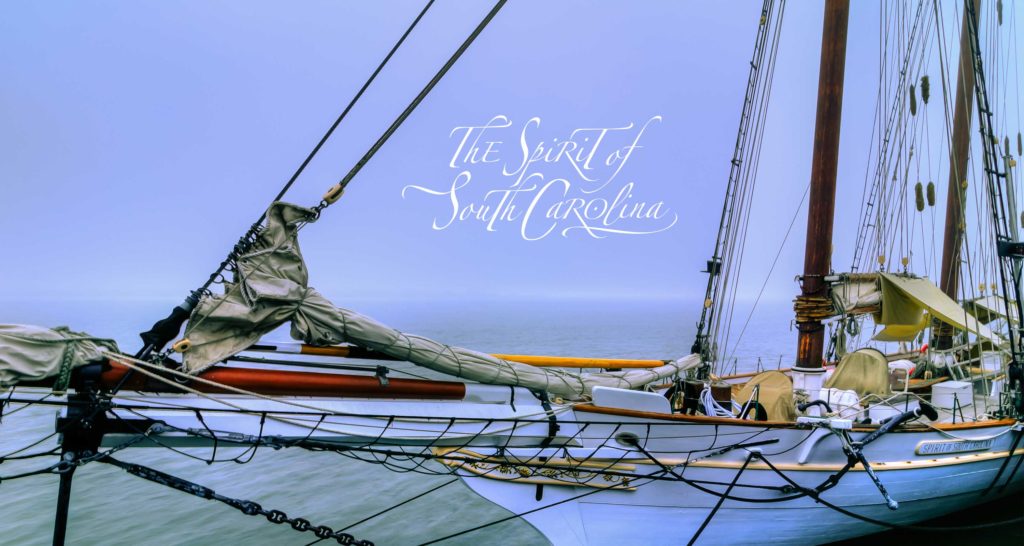 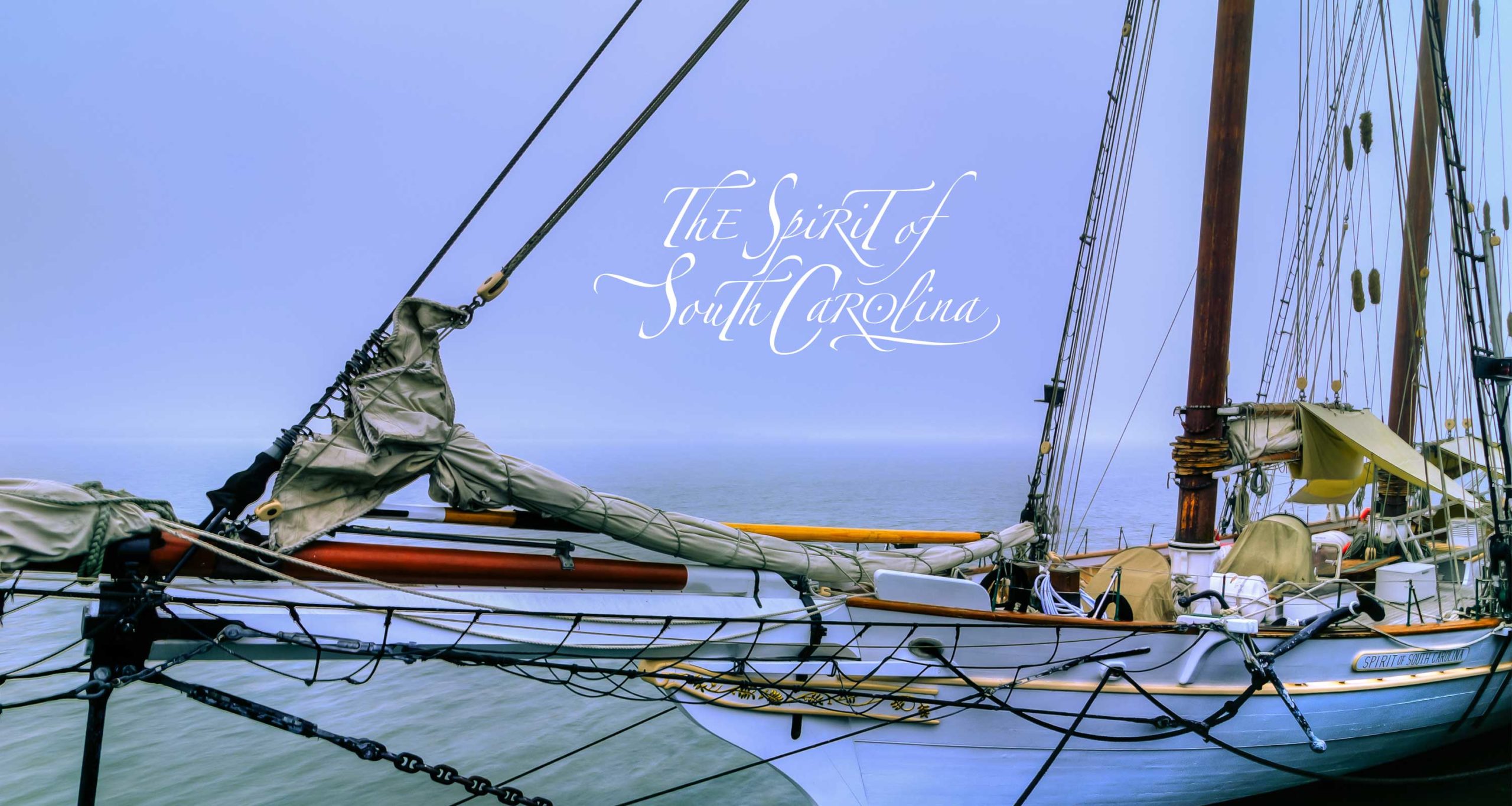 Earlier in the Spring semester, as a part of the LCWA World Affairs Signature Series Sea Life, Dr. Carl Wise and Dr. Blake Scott coordinated an oral history booth and educational talk aboard the Spirit of South Carolina.

Dis/placements: Revisitations of Home is an online exhibition presented by the Halsey Institute of Contemporary Art at the College of Charleston School of the Arts in Charleston, South Carolina.

Ideas of home have taken on new meaning in this fraught moment of pandemic. For people less fortunate, home can represent insecurity and be charged with fear; and for those on the frontlines of COVID-19 it may be a place newly tenuous, frequented for momentary respite at best.

Dis/placements features ten artists whose works deal with issues of displacement from their ancestral homeland in various capacities. Artists were paired with writers who have offered their own reflections on the work and its relationship to the concepts of home and displacement. When taken together, this collection of work provides an opportunity to consider the traits and aspects that are both similar and jarringly disparate–from Asia to Africa, to Europe and the Middle East.

Thank you for your interest in the 2020 Port Cities in the Atlantic Conference May 14-16, 2020 sponsored and organized by the Carolina Lowcountry and Atlantic World Program here at the College of Charleston.  We had a wonderful schedule prepared and were very excited to hear more about your research. Unfortunately, given the global pandemic of COVID-19 and the various restrictions imposed by the College of Charleston, the state of South Carolina, and the nation, the conference has had to be cancelled.  This decision was not made lightly. As disappointing as the cancellation may be, health is of the utmost concern. We sincerely apologize for any inconvenience and are happy to answer any questions that you may have.  Our hope is that you’ll continue to support the mission and programming of CLAW and keep an eye out for future opportunities to visit us here in Charleston.  Next Spring CLAW is partnering with the French Colonial Historical Society for a conference in Charleston.

All of us at the College of Charleston send our sincerest wishes for your continued health and well-being. We are grateful to have connected with you and your research.  Thank you.

Call for Papers: Port Cities in the Atlantic World Conference

The conference will commemorate the city of Charleston’s international maritime links, examining cultural, economic, and historical connections between and among Charleston and other Atlantic World port cities. In addition to extending the usual academic style call for papers, the CLAW program will invite universities, museums, historic sites, and municipal authorities from other Atlantic World port cities to send delegates to attend the conference. These delegations would be able to describe their own cities’ and institutions’ histories and missions, but more than that will be able to make connections with the College of Charleston and the city in general that extend well beyond 2020. We would like, for instance, to feature plenary sessions during the conference that give snapshots of the Atlantic World in 1670, 1770, 1870, and 1970, with a final plenary that looks to 2070 and the issues, notably of sea-level rise, that confront Atlantic World port cities. These plenary sessions would be models of global intellectual and cultural exchange.

In many ways the planned conference is the logical culmination of all that we have been doing with the CLAW program over its 25 years of existence, drawing public attention to the circulation of people, things, and ideas around the Atlantic World. It would allow us to discuss all aspects of the Atlantic World—trade, migration, race and ethnicity, religion, foodways, material culture, political developments, gender, slavery, resistance, and freedom–in one fell swoop. It will be the biggest, most ambitious conference we have attempted and will make a significant contribution to the overlapping celebrations of the city’s 350th anniversary and the College’s 250th.

Ships, the sea, and their ports of call have long stood as “paradigms of human existence.” In his classic study of the African diaspora, The Black Atlantic, Paul Gilroy used the metaphor of a ship to show the importance of movement in the shaping of modernity, especially in relation to the black experience in the Americas, Europe, and Africa. “The image of the ship,” Gilroy argued, is “a living, micro-cultural, micro-political system in motion.” Likewise H. Stuart Hughes’s classic study of Jewish emigrants to the US in the 1930s is entitled “Sea Change,” and the Puritan settlement of New England is always bound up with the legacy of a single vessel The Mayflower.

Our 2020 CLAW conference will trace the maritime routes and the historical roots that link port cities around the Atlantic World. Ships carrying people, goods, and ideas have been traversing the Atlantic and transforming the world at least since the Columbian exchange began in the fifteenth century. They still circle the globe today with cargo, tourists, and diverse sailors. In the spirit of this ongoing port history, “Port Cities of the Atlantic World” will bring academics and community leaders together to share their research on the history and culture of their respective ports of interest, whether it be Charleston, Savannah, New York, Havana, New Orleans or further afield – Panama, Cartagena, Bridgetown, Rio, Cape Town, Luanda, Freetown, Dakar, Cadiz, Lisbon, Nantes, Bremen, Hull, Liverpool, Bristol, etc. 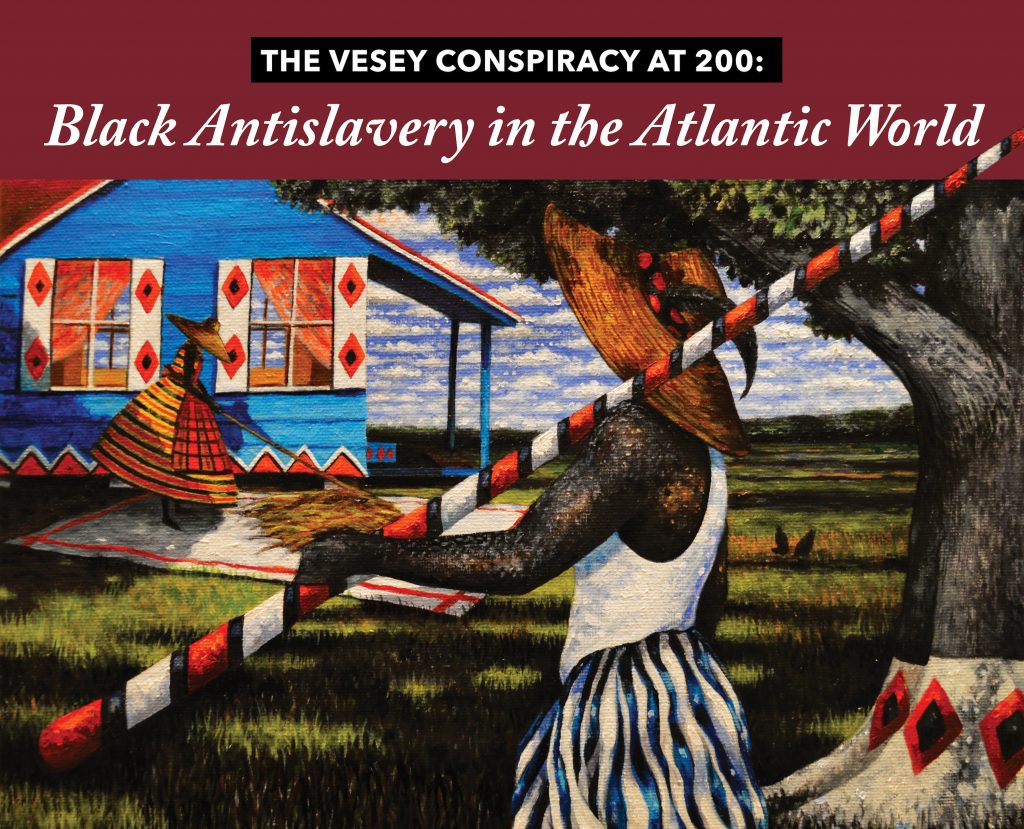 Register for the 2019 Conference: The Vesey Conspiracy at 200 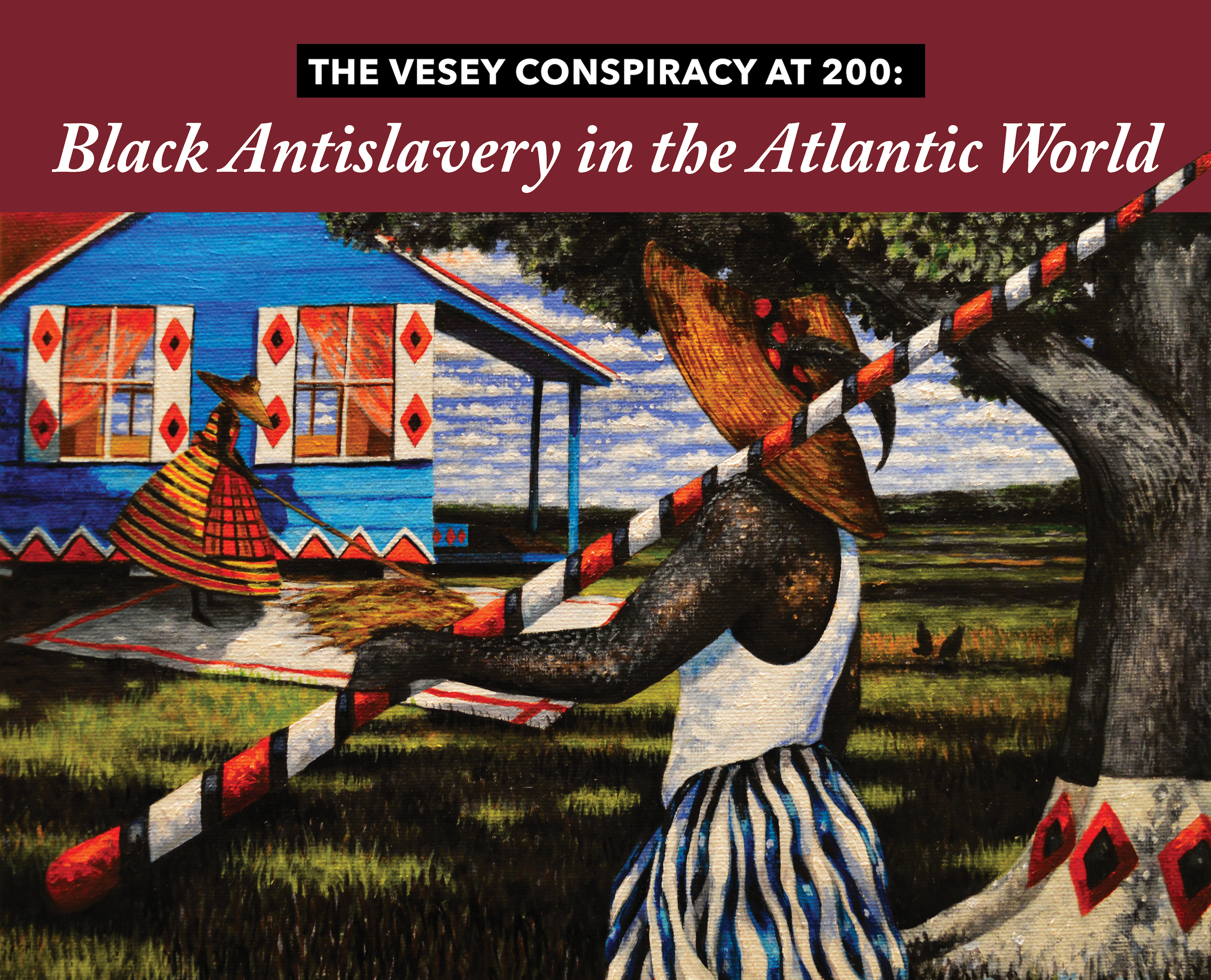 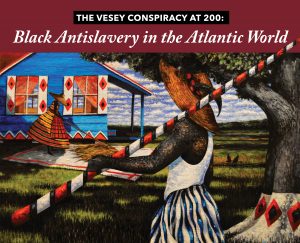