Series: “When the War Is Over: Memory, Division, and Healing” 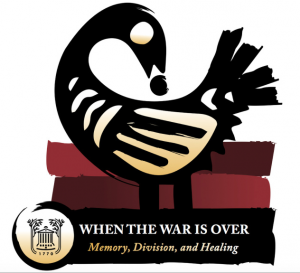 “When the War is Over”: A series of public events dedicated to thinking about building Community After Periods of Slavery, Persecution, Genocide, or War.

In much the same way that trauma in an individual’s past causes psychological damage, communities that have experienced traumatic violence also bear psychological scars from that experience. Psychiatrists have for many years asserted the value of the “talking cure,” arguing that healing comes from addressing, not suppressing, the memory of the traumatic event. In the US military, for example, treatment of PTSD is generally informed by the work of psychiatrist Judith Herman, author of the now-classic 1992 study Trauma and Recovery. In the cases of traumatized communities, the tendency in recent years has also been to attempt “talking cures”; numerous countries have opted to establish truth commissions as a way to stabilize post-conflict situations. Hoping to avoid the potentially endless cycle of tit-for-tat vengeful “justice,” countries as diverse as Chile, Sierra Leone, and South Africa have used truth commissions to deal with their violent pasts not by repressing memories but by bringing them into the open.

Despite the successes of the Civil Rights Movement, the scars of slavery and of institutionalized racism in the United States are still present, manifesting themselves in a variety of ways, including continued systemic discrimination as well as individual acts of violence. In the latter case, the mass murder of nine of our fellow citizens while at prayer in the Mother Emanuel Church in June 2015 reminded us all that Charleston, our beautiful home city, is also a site of trauma, suffering from the suppressed memories of native genocide, two centuries of racialized slavery, and a century of legalized racial discrimination. Although contemporary historians have put the story of these traumas into print, the visible, material landscape still suppresses the trauma: public memorials and the demographics of urban space still render Native American and African American experience virtually invisible.

Elsewhere in the world, communities that have experienced similar trauma and racial, ethnic, or sectarian division have begun to address the effect of statues, monuments, and memorials honoring eminent historical figures whose ideologies and policies are out of step with contemporary assertions of universal human rights. In perpetuating a positive memory of leaders like Cecil Rhodes, for example, these memorials enshrine and set in stone attitudes we now consider to be anathema. Campaigns to remove statues honoring Rhodes from places of honor in South Africa and in his native England have led to wider campaigns for social justice, including equal access to education for all.

In the US, the last year has seen a wave of local initiatives to remove or modify statues and memorials honoring Civil War generals and politicians, as well as efforts to rename buildings named in honor of post-War politicians who advocated for and/or profited from racial segregation. These initiatives have in turn spawned renewed violence, notably in Charlottesville, Virginia last August. Here in Charleston, confusion still reigns over how to handle the memory of John C. Calhoun, whose statue towers above the city in Marion Square.

As an academic institution, dedicated to the notion that wisdom itself is liberty, we at the College of Charleston feel called upon to use our expertise in the humanities and social sciences to provide an intellectual framework to negotiate these contentious issues. “When the War Is Over:  Memory, Division, and Healing” thus brings together in a loosely unified series, a collection of public lectures and forums that address historical trauma and the ways in which sites that have experienced such trauma have moved, or might move towards building sustainable, peaceful community. In broadening the discussion from Charleston and the US to include the Northern Irish “Troubles” and the Holocaust, the series aims to provide a discursive context within which a fundamental commitment to human rights governs policy decisions that lead toward peaceable coexistence, the eradication of racism and other forms of discrimination, and the prevention of genocide.

We warmly invite the public to attend these events as we strive to move toward a better, more inclusive understanding of our common but divided history. A full list of the events will be available at https://claw.cofc.edu/events/