These functions include: a jailhouse for hapless pirates, a customs and exchange building for a myriad of Atlantic goods entering the port city, a British-controlled dungeon harboring Revolutionary prisoners, a civic government institution where the South Carolina delegates who signed the Declaration of Independence were elected, the location of the the South Carolina convention which ratified the U.S. Constitution, and where George Washington was lavishly entertained for a week during his national post-Revolutionary war tour. However, a new role of the Old Exchange Building, equal in national significance to the aforementioned functions as well as critical to comprehending the local history of Charleston, has been researched and verified by Rice University Ph.D. candidate and research affiliate of the Old Exchange Building, Edwin C. Breeden. 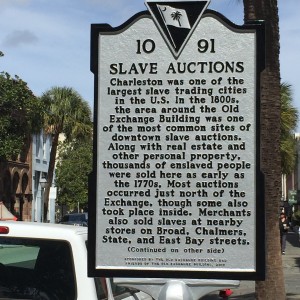 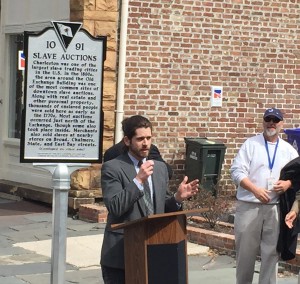 “The city of Charleston—its past, its present, and undoubtedly its future—cannot be fully understood apart from the institution of slavery, ” asserted Breeden, “The history of slavery in the United States likewise cannot be explained without at some point uttering the name ‘Charleston.’ This is especially true of the history of the slave trade in the U. S. Today, we unveil this marker so that, as visitors and locals walk around Charleston and enjoy its beautiful public space, they might remember how this history of slavery and the slave trade was once a fixture of that same public space: namely, in the form of the public slave auction.”

He continued, “One of the most frustrating parts of writing a marker like this is deciding everything you have to leave out. It is up to us as Charlestonians to actually tell that bigger story. At the Exchange, we’re still working to learn more about this site’s role in that story and improve how we share it with others, but we hope that this marker will not only aid us in doing so, but that it will be a tool for others to do the same, be they educators, tour guides, interpreters, or anyone else who wishes to contribute to the much broader and essential project of sharing a more complete, open, and honest history of our city with others.”