The CLAW program, in collaboration with Wells Fargo, was pleased to host Dr. Richard Price, Professor Emeritus of American Studies at the College of William and Mary, as the first of this semester’s Wells Fargo Distinguished Public Lectures and the keynote speaker for the 2016 conference on maroonage. Dr. Price is a pioneering figure in the field of ethnographic history in general and of maroonage in particular.
Institutionally, his academic contributions include founding the Department of Anthropology at Johns Hopkins University; intellectually, he is credited as the first historian to conceptualize Maroon (runaway slave) communities throughout the Americas in a comparative framework.

While the prevalent cultural conception of a maroon is perhaps best encapsulated by images of the swashbuckling Robinson Crusoe, the hapless S.S. Minnow crew on Gilligan’s Island, or, more recently, Tom Hanks’ pitiful character in the film Cast Away, there is a stark difference between “being marooned” and “actively marooning.” According to Price, being marooned is a passive action, where the course of a human’s life is derailed by forces beyond their control. Suddenly, they find themselves isolated from a civilization they miss and aspire to return to. Actively marooning, on the other hand, occurs as a result of the choice of a human being. One who actively maroons chooses to separate themselves from civilization due to marginalization and discrimination. The descendants of fugitive slaves who settled in the West Indies and Guiana today are known as Maroons.

Previously a group of people considered “without a history” due to their oral traditions and widespread illiteracy, Richard Price has devoted much of his life to studying the Maroon peoples and the Saramaka especially. The ancestors of the Saramaka were among the West Africans sold to Europeans during the late seventeenth and early eighteenth centuries. 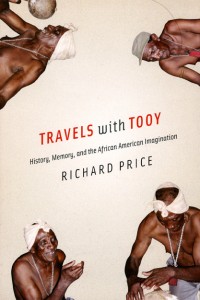 Drawing on his work entitled, Travels with Tooy: History, Memory, and the African American Imagination, Price asserted that the historiography of Maroon peoples should be taken seriously. Tooy was the keeper of his community’s oral traditions and thereby a “time traveler who crosses boundaries between centuries, continents, the worlds of the living and the dead, and the visible and invisible (press.uchicago.edu).” Through years living with Tooy, Price learned and recorded the history and spirituality of a people whom closely guard their culture from outsiders. Price discussed how the

Saramaka had forged a new African culture, one that combined elements of their native land, their experience among Europeans in bondage, and their time living in French Guiana. This is perhaps best made evident in their language, Saramaccan, an Atlantic world amalgam of African, English, Portuguese, and Dutch lexicons. He argued that a similar phenomenon had occurred within the cultures of the descendants of enslaved Africans still residing in the United States and the Lowcountry, in particular. With a “New World creativity,” as unwilling exiles, enslaved refugees, and maroons, these peoples came together and “forged a new African American identity” that survives today.