According to Dr. Butler, “The methods of law enforcement and criminal punishment in early South Carolina represent a continuation of ancient English practices, with a bit of modification to suit local conditions.” Butler elucidated the early criminal justice system of Charles Towne, including the protocol for crimes, a rudimentary police force, the functions of the Town Watch and City Guard, as well as early punitive methods. For instance, the practice of “gibbeting” an executed criminal, that is, hanging the dead body of the convicted person up in cage-like structure in a public space, was inherited from early modern English penal practices. 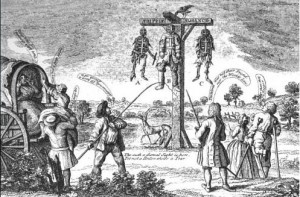 In these pre-modern times, the state sought legal restitution by punishing the body of the criminal. The punishment would typically occur in a public space in order to reify the power of the state and also serve as an example for what would happen to future ne’er-do-wells. Typically, a criminal would be gibbeted after being hanged. One of early Charleston’s most famous criminals, the Gentleman Pirate Stede Bonnet, faced the gallows in 1718 for crimes against the people and city. 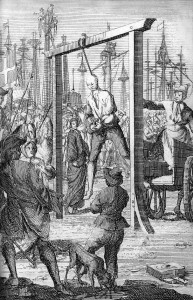 A criminal could also face the pillory, lashings, imprisonment, and even the stake, depending upon the severity of the crime. Dr. Butler’s claims are verified by contemporary newspaper articles, of which an extensive collection is located in the South Carolina room at the Charleston County Public Library or in the archives at the South Carolina Historical Society. The pages of the South Carolina Gazette contain a myriad of interesting columns detailing local criminal activity, serving not only as discouragement to delinquent behavior but also as a form of entertainment for the colonists. For instance, “Tom Thump the Devil” was convicted in October of 1744 for repeatedly stealing a neighbor’s hog. The historic material is available for the public to peruse at their content!