Statement from CLAW Director on the Emanuel AME Massacre

In her most recent commentary on the Emanuel AME Massacre and Charleston’s response, Julia Eichelberger writes,  “It’s starting to seem possible that we could begin to accord our grief its proper weight. Grief could spur us to make things better, to undertake the much more confusing, much more uncertain work of justice and fairness, of a social infrastructure worthy of the name “community.” We’re succeeding, in this moment, at expressing our wish for that, and that is a start.”

Using Julia’s beautifully eloquent words as a starting point I want to set out some of my own thoughts both as an individual and specifically as the director of the Carolina Lowcountry and Atlantic World (CLAW) program here at the College. Like everyone else I’ve had great difficulty articulating my response—I’ve made more false starts on this statement than I care to count—and I expect that this one too will fail to express what I want it to, and will hit false notes both in my ears and some of yours. So my apologies in advance for inevitably falling short. 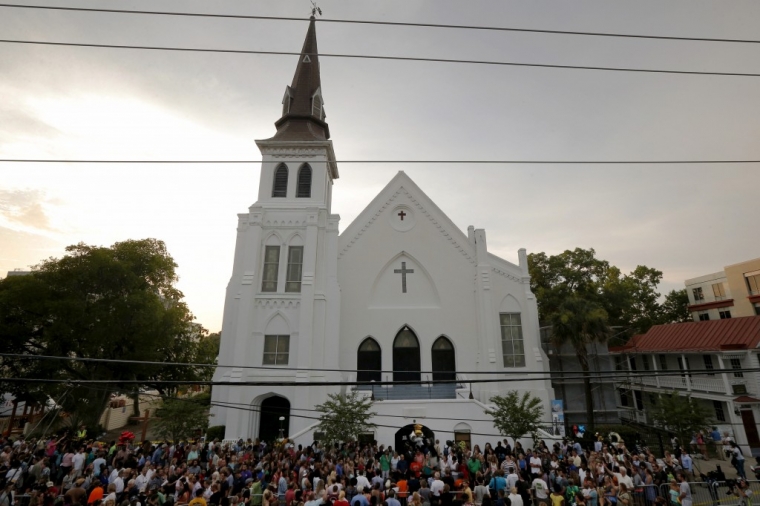 Last week’s mass-murder at Mother Emanuel left us in shock and tears. The subsequent response at the prayer vigils at Morris Brown AME, at the TD Arena, and elsewhere, and the resumption of services at Emanuel, including last night’s prayer meeting, has shown a more defiant joy than any of us could have imagined.  Is it right to be proud of this city on such an occasion? Maybe it really is. We are not an integrated city, but we are one city, sharing in grief and outrage, and asserting a common desire for love and unity to overcome this latest manifestation of hatred and division that, though centuries old, still lingers. And all who live here now, today, are part of this beautiful city’s troubled, troubling, and often brutal history.

For the past 20 years or so the CLAW program has been exploring the nature of this shared history and the radically uneven ways in which different groups have experienced the “same” events. I’d like to think we have been working in exactly the same spirit and with the same ultimate end as set out in Julia’s words above: undertaking that confusing  and complicated work that leads to justice and fairness, and a social infrastructure worthy of the name “community.” This is why on a recent Facebook post I wrote that our work begins again.

Less than two weeks ago, but still days before our most recent end of innocence and complacency, Stephanie Yuhl, a historian whose book, A Golden Haze of Memory: The Making of Historic Charleston, takes Charleston to task for glossing over its history in the manner of the beguilingly beautiful watercolors of Alice Ravenel Huger Smith, gave the final presentation at the CLAW-sponsored Southern Association of Women’s Historians conference. Although she still remains critical of Charleston’s history and its white elite’s narcissistic self-representation, she clearly also still loves this place, and her love is encouraged by the strides the city has made in the last few years to present a more comprehensive and inclusive story. In conversation after the presentation, Stephanie was light-hearted and upbeat.  No less harsh on past failures she told us that she thought “Charleston’s going to be all right.”  It was heartening and validating to hear her say so.

Four days later Dylann Roof vented his violent hatred in the basement of Emanuel AME, taking the lives of nine—nine—of our fellow citizens, including one of this community’s finest spiritual and political leaders.

I do not claim Clementa Pinckney as a personal friend, but we had worked together on a number of CLAW programs. At the end of 2012 he had allowed us to promote Emanuel AME as the go-to church for the “Watch Night” service on the eve of the 150th anniversary of the Emancipation Proclamation’s coming into effect on January 1st 1863.  He had twice allowed me to apply (unsuccessfully, alas, on both occasions) to the BBC to have the producers of their weekly television show “Songs of Praise come to Charleston” as part of the Jubilee Project or as part of our commemoration of the sesquicentennial of the end of the Civil War.  Most recently he had stepped in at the very last minute to give the homily at our memorial service on Hampton Park in honor of all of the dead of the Civil War. You can see that thoughtful, wise and generous address on YouTube at https://www.youtube.com/watch?v=l6T6OxSVkrU, and read an account of it by Yale University historian David Blight at http://www.theatlantic.com/politics/archive/2015/06/pinckney-charleston-civil-war-150-years/396455/ (Blight was actually anxious that Pinckney had been too generous in his comments). Immediately after the memorial service, Pinckney had had to go to another event at 4pm (I believe in response to the Walter Scott shooting), before ending the day at the Nat Fuller’s Feast reenactment that brought together an eclectic array of community leaders in the spirit of reconciliation—literally breaking bread at the same table (and partaking of a fabulous feast, too!). For Chef Kevin Mitchell’s account of that event in the form of his “Letter to Nat Fuller,” please check out https://jubileeprojectsc.wordpress.com/2015/04/28/chef-kevin-mitchells-letter-to-nat-fuller/, and for context on the original feast in 1865, take some time to explore the Lowcountry Digital History Initiative (LDHI) online exhibition at http://ldhi.library.cofc.edu/exhibits/show/nat_fuller.

All of this is to show not just what a terrible terrible loss we have suffered as a community as a result of the murder of Reverend Clementa Pinckney and his eight parishioners, but also to show how intentionally the CLAW program has been working toward Julia’s “social infrastructure worthy of the name of community.” But where do we go from here, and how do we continue? Mercifully, the public response so far has been overwhelmingly positive, so much so that a number of commentators have become wary that we will again retreat into the complacent belief that the love and unity of the bridge demonstration, for instance, really means that Charleston is going to be “all right,” already is “all right” without any further structural change or any further self-scrutiny.  The CLAW program is absolutely committed to facilitating that further self-scrutiny as a means to effecting structural change. Indeed, for me, Roof’s attack reasserts for me the vital—life-and-death—importance of this work. I hope all at the College will join me in rededicating ourselves to our fundamental mission as educators in inculcating the wisdom (not technical knowledge) that is itself liberty. For all.

Part of that self-scrutiny must include the uncomfortable truth that for most of its history the College, as an exclusively white institution, has been part of the problem, and that without appropriate action and leadership we can still be—or at least be painted as—part of the problem. Today, however, and in the coming months, I believe we as a faculty have a unique opportunity to be part of the solution. Kevin Keenan circulated an e-mail yesterday indicating one way in which our choice of Freedom Summer as a common read enables us to hold the necessary dialogues. If you have suggestions for additional events or additional steps that we need to take, please share them with us so that come August we can set out an appropriate program that honors the memory of the men and women killed last week, and that lets us do our part in trying to ensure that no such event happens again.

Director of the Program in the Carolina Lowcountry and Atlantic World